Remedy Entertainment and Rockstar recently announced Max Payne 1 and 2 remakes that would revive an excellent series that has long been on the backburner. As all three games from the Max Payne series are fantastic third-person shooters, I’m excited about this long-awaited return. Despite that, this announcement also leaves me worried in the wake of Grand Theft Auto: The Trilogy – The Definitive Edition.

It’s no secret that Rockstar botched the re-release of its classic GTA titles. And although the Max Payne remakes already have a grander vision than GTA: The Trilogy – The Definitive Edition did, Remedy Entertainment and Rockstar need to be careful not to repeat any of the same mistakes while recreating more all-time classics.

Remasters and remakes can be an important tool in game preservation, going beyond simply bringing straight ports on digital storefronts. It’s a surefire way to earn goodwill from fans and highlight one’s legacy, but Rockstar messed this process up with GTA: The Trilogy – The Definitive Edition.

GTA: The Trilogy – The Definitive Edition had an identity crisis where its developers couldn’t decide whether or not they wanted the game to be a remake, remaster, or simple port of these classics. This non-committal nature made the final product feel underbaked under all three labels.

The developers didn’t make enough radical changes to be a remake but did modify enough, like the combat controls and visuals, that it didn’t fit under the port umbrella either. Remaster would seem like the best label, but it wasn’t as polished as other modern remasters. As I played GTA 3 for the first time, I kept wishing that Rockstar had just remade this innovative sandbox game rather than half-commit to a remaster that wasn’t serviceable with that label or as a traditional port.

The remasters were all extremely buggy upon their release as well, indicating that their development may have been rushed or that Rockstar simply didn’t consider them a high priority. Worsening that issue is the fact that if I wanted to play the original, I couldn’t as Rockstar delisted the classic versions of the included games.

Following GTA: The Trilogy – The Definitive Edition, it seemed like Rockstar wasn’t taking preservation too seriously. If that’s how it treats its cash cow series, how should we expect it to handle a dormant franchise like Max Payne? That’s what makes Remedy Entertainment’s Max Payne announcement exciting and worrying all at the same time.

Rockstar owns the Max Payne franchise but hasn’t done much with it since May Payne 3. Classic versions of Max Payne and Max Payne 2: The Fall of Max Payne are available on Steam and Xbox, but now Remedy and Rockstar have voiced their intentions to “develop the games as a single title for PC, PlayStation 5 and Xbox Series X/S using its proprietary Northlight game engine.”

It seems like we’ll be getting more of a Crash Bandicoot N. Sane Trilogy style overhaul from these remakes rather than what GTA: The Trilogy – The Definitive Edition was. Still, I can’t help but wonder how many radical changes Remedy will make to the original Max Payne formula and if those changes will be done well.

The comic book cutscene of the first two Max Payne helped give that series its gritty noir charm. Will the remake recreate these comic books panels or realize these scenes with the latest CG technology? Will the game’s third-person camera be pulled back like the originals or closer to the titular character like most modern third-person shooters? Will bullet time work the same as the originals?

Whatever Remedy decides, it needs to have faith in and commit to those choices. Thankfully, the studio does appear to have a clearer vision for this remake project as it is already flaunting the remake label (Rockstar never committed to labeling GTA: The Trilogy – The Definitive Edition as a remake or remaster) and calls the project “a typical Remedy AAA-game production.”

These Max Payne remakes are intended to be grander and better than GTA: The Trilogy – The Definitive Edition ever was, but Rockstar could still make the same mistakes again if it isn’t careful. Rockstar and Remedy shouldn’t rush this game to market. They need to have faith in any bold creative choices they want to make and keep the classic versions of Max Payne up on digital storefronts when this remake releases. 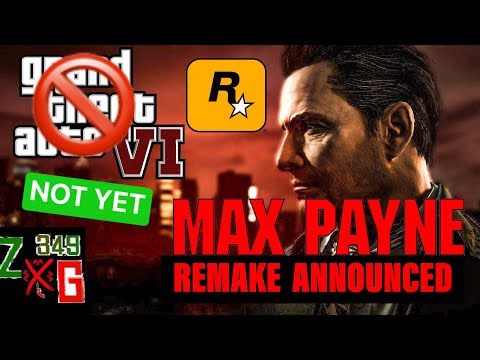 Rockstar and Remedy could have a gem on their hands by committing to the project one way or another. But the project needs a clear vision, or else it risks becoming a remake that will forever tarnish the Max Payne series and each company’s reputation.